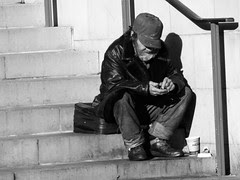 In prison if you have a gang affiliation it's important to show your colors. For my older inmates---over age 40---that would be grey.

In general older inmates are respected by younger inmates. They make good cellmates because they're not considered a threat and because they may have some good advice to offer. They're quieter and less annoying than young cellmates who are busy yelling to their friends down the tier.

Chronological age and physical age aren't always the same. The street lifestyle can add ten to twenty years to one's physical age. In between the substance abuse, head injuries and HIV dementia there aren't a lot of young neurons in my outpatient clinic.

By policy every inmate is required to have an annual physical. Beyond a certain age they also start screening for dementia with an annual Mini-Mental State Exam. Neurology consults are available and you can also do the basic dementia related laboratory work. Inmates can be sent to outside institutions for brain scans if necessary.

The biggest challenge in carrying for elderly inmates is the need for nursing services. No general population tier has nursing staff to supervise showers, dressing or feeding. Elderly prisoners with mobility impairments are at risk of falling because correctional facilities just aren't built for fall prevention. There are no geri-chairs or vest restraints or non-skid rubber mats in the showers. My most memorable fall-risk example was of an elderly inmate with Parkinson's disease shuffling along in leg irons with untied shoes. It was enough to make a geriatrician cry. (I did make sure his shoes were tied before returning him to the tier.)

Some jurisdictions have options for special parole for elderly prisoners. You usually have to document that the inmate has a six month life expectancy or else is too incapacitated by disease to pose a threat to society. Of course, whenever you do that you run the risk of being wrong. Our most famous case of a wrongful lifespan estimate involved Deidre Farmer, a transgendered inmate with terminal AIDS. (Mr./Ms. Farmer was best known for his role in the landmark Supreme Court case Farmer v. Brennan, which established the mens rea (mental state) standard necessary for a facility to be found "deliberately indifferent".) Farmer was granted a medical parole and promptly went on to get better and commit new identity fraud offenses. He was ultimately apprehended after trying to forge his own death certificate.

So elderly folks with antisocial personalities can still be antisocial; they just do it slower.
Posted by ClinkShrink on Saturday, November 18, 2006

I'd like to propose that we raise that bar on "elderly" (40!). I have patients in their 80's who trek along quite well. And my experience of the crew in their 70's is that they are busy globetrotting and taking courses.

oh, and I'd like my color to be pink

but being in prison, and street life, ages a person faster/more, is what I read in there!

So a patient of clink's that is 40 years old, is possibly like 60 or more, is what I thought she was saying!

I'm not trying to sound critical, just what I saw from it.

My color is, er, well I'd be a crazy patchwork quilt of colors. Hee! Cause my mind whirls and shoots off in all directions and can't settle on one.

Well, how about my current fave, is a Delica Japanese seed bead (cylinder bead) with a color name of chocolate cherry. In the right light, there's a cherry translucence to this chocolate brown glistening precision-cut bead. I want to make a peyote-stitch rope necklace out of this one (rope makes it sound thick, but I can make it thinner!)

Woops, like you care, lol! And the lemonade color of those beads is aptly named, and OH so cool and delicious looking (I'm freezing cold, why am I craving lemonade!!!!)

Oh yeah, and I am now iatrist-less. I feel like a rebel. (he closed his practice)

I always learn something from Clink's prison insights. It's like a whole 'nother culture in there.

roy: I know what you mean. It's so foreign, it's fascinating. Like those "going tribal" specials on the Travel Channel. Clink should do one that's "Going Criminal" or something. Maybe I should have been an anthropologist. :)

Midwife, Morgan Spurlock ("SuperSize Me") already beat me to that one. He did an episode for the FX channel called "30 Days" where he goes to jail in Virginia. He found that not everyone who is locked up is evil---imagine that.

It's good to hear that elderly folk get a little respect in prison. I wish the same could be said outside of it! :P

(I'd like my colour to be chartreuse with yellow speckles in it.)

Hm... did Morgan Spurlock do a good job with that show? Haven't seen it. Maybe I'll check it out.