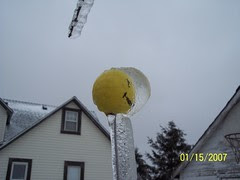 Here's an interesting article from Finland in the American Journal of Psychiatry [PubMed] looking at potential treatments for intravenous amphetamine or methamphetamine (speed or ice) dependence.

"While methadone and buprenorphine have proven
highly effective substitute medications for opioid depen-
dence (3), no pharmacological treatment has been found
thus far for amphetamine dependence (4). Partial dopa-
mine agonists such as aripiprazole are considered to be
promising medications for addiction, since they are sup-
posed to balance and restore normal function of the me-
solimbic dopamine system (5). Observational studies,
nonrandomized trials, and one randomized study without
a placebo arm have suggested that oral dextroamphet-
amine may be used to replace illicit intravenous amphet-
amine use (4), which suggests that oral methylphenidate
(dopamine reuptake inhibitor) might also be used to sub-
stitute for intravenous amphetamine use. On the basis of
this information, we aimed to compare the effectiveness
of aripiprazole, methylphenidate, and placebo in the
treatment of amphetamine dependence using urinalysis
as an objective measure of primary outcome."

What was interesting about this study, and why they stopped it prematurely, was that they discovered that the Abilify increased the amphetamine abuse. At the end of the double-blind, placebo-controlled study (n=53), looking only at positive urine samples to indicate relapse, 79% of the placebo group relapsed, compared with 46% of the methylphenidate group (54mg/day), and 100% of the aripiprazole group (15mg/day).

"Our results indicate that methylphenidate treatment is
associated with a statistically significant reduction in in-
travenous amphetamine use when compared with pla-
cebo, providing the first controlled evidence of an effective
pharmacological treatment for amphetamine depen-
dence. On the contrary, aripiprazole treatment was associ-
ated with a higher proportion of amphetamine-positive
urine samples than placebo.

While aripiprazole (in amphetamine dependence) and
naltrexone (in opioid dependence) may be good treat-
ments in theory, it seems that effective pharmacological
maintenance treatments for intravenous drug depen-
dence are substances that induce at least some euphoria,
such as methadone and buprenorphine in opioid depen-
dence (3), or methylphenidate in amphetamine depen-
dence. Slow-release methylphenidate may be superior to
usual short-acting formulation, since the patient may start
experiencing cravings for amphetamine as soon as the ef-
fect of the substitute drug disappears. It is likely that meth-
ylphenidate should be dispensed mostly on a daily basis
under supervision because of its abuse potential. Ari-
piprazole (15 mg/day) was not effective in this trial (an ab-
stinence facilitation trial), but we cannot draw any conclu-
sions on its potential efficacy in a relapse prevention study
among detoxified patients.

These results show that amphetamine use began to de-
crease substantially as a function of time after 10 weeks of
methylphenidate treatment reaching statistical signifi-
cance at 18 weeks, which indicates that it may take an
even longer period of time than 20 weeks to achieve full
benefit from this treatment."

So, they suggest that, for treatment purposes, Ritalin:amphetamine::Methadone:heroin, and further suggest daily, administered dosing to reduce abuse, perhaps earning weekend take-homes. Hmm, that doesn't sound too promising, except for maybe court-ordered folks who want to stay out of jail.

But the real take-home message, for me, is to consider avoiding Abilify in pts with psychosis who have a history of comorbid amphetamine abuse.

Amphetamine molecule. Note the phenyl ring on left, Nitrogen on right, and 2 carbons (ethyl) in middle. The squiggly is where a chemical group would be added to change the type of amphetamine compound. 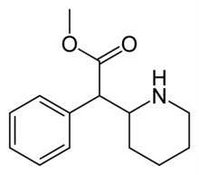 Methylphenidate/Ritalin molecule. Note instead of the N-amino group on the right, there is now a pyridine ring (with the N). That makes it less potent.

Norepinephrine molecule. Note the common phenyl ring on left, N-amino group on right, and 2-carbons (ethyl) in the middle.

Did any of the patients in the study abuse the ritalin?

When I was in medical school we had a bunch of patients who had "Ritalin lung". Apparently smoking ritalin is really bad for you. Who woulda thought?

-- Midwife With a Knife

This is interesting, another fascinating study out of Finland. I didn't read the article, though I may now. From your synopsis, I found it odd the you didn't say that Ritalin/methylphenidate IS an Amphetamine (not an amphetamine substitute). Ritalin is a controlled, abuseable, addictive drug, and I'm not sure how the study got negative urine tox screens on folks taking it for the study. This is very much akin to giving methadone (a long-acting, legal narcotic, but still a narcotic, given by mouth, rather than IV via drug dealer. Less of a "high".

I'd be hard pressed to write a ritalin script for a known drug addict.

There are other means of getting a high off po ritalin, I won't give lessons here.

I didn't see Ritalin abuse mentioned, and it didn't seem like they looked for it, but their suggestion that it be doled out daily is telling.

Dinah's right that this is exactly like substituting methadone for heroin. It is a harm-reduction strategy. We haven't seen much meth in this area, but parts of the country have been ravaged by this extremely addictive drug. This does not seem like a private practice sort of approach... more like that seen in an addiction clinic.

Correction: I think the Hydrogen on the N-ring in Methylphenidate makes it NOT a pyridine ring (which contains double bonds), but something else.

(Man, this brings back those organic chemistry memories... I really dug that stuff.)

From my limited experience on this blog, it seems as though a lot of psychiatric studies come out of Finland.

Maybe cause it's cold and they've got nothing better to do?

I'm KIDDing! Both about that they've got nothing better to do, and that doing such a study is what you do when you have nothing else to do.

I do wonder, though, if they are indoors alot more than us here in the U.S., and also with the wierder light schedule being closer to the arctic circle and stuff, if they have more SAD and longer season for it and stuff, and more pronounced; heck, maybe more depression in general or maybe not, cause they'd be acclimated to the wierd daylight hours. Or something.

You can't compare the molecular structure really... amphetamine (Alpha-Methyl-PHenylEThylAMINE) is a methylated form of naturally occuring PEA, and binds to the trace amine receptors, principally TA1, which causes an efflux of catecholamine stores, mostly norepinephrine and some dopamine (and very little serotonin).

Methylphenidate is a dopamine (and NE to a lesser degree) reuptake inhibitor.

Norepinephrine is a direct adrenergic agonist.

Aripiprazole is a fucking atypical antipsychotic! It *reduces* DA tone. No wonder they relapsed-- people who get addicted to stimulants tend to have horrible DA tone (levels/receptor sensitivity/too many transporters etc) to begin with. If you give them a fucking antipsychotic you will turn them into a zombie.

Think about this for a minute. You give antipsychotics to people with too high of DA tones naturally-- like schizophrenics-- you do NOT give them to someone with a horribly low DA tone to begin with who's also suffering withdrawal.

The analog here is giving a opioid antagonist, not agonist, to someone going through opioid withdrawal. That'd put them through hell, and possibly even kill them.

Here's a thought: just give the amphetamine abusers, amphetamine... good old dexedrine under a doctor's supervision. Most "abusers" don't use the drug to get high, they simply use it to function. They're probably *not* going to grind it up and do lines. That may be a valid argument for cocaine, but simply doesn't cover the mostly utilitarian illicit use of amphetamine. (usually academic use for dextroamphetamine products)

Methylphenidate is at least an attempt in the right direction, but MPH is a horrible drug compared to dextroamphetamine; it has a short half-life, a nasty crash, and is simply less effective even at 2x the dose due to the difference in effects. This is shown clinically in the ADHD medication studies. (which most stimulant "addicts" have and are untreated, btw, by an overly dismissive and non-empathetic medical community that tends to ignore the problem in adults... then wonders why they take drugs illicitly) The anti-stimulant witch hunt and paranoia doesn't help things either... the odds of a GP prescribing a stimulant to an adult are pretty low. It's a sad day when being politically correct takes precedence over patient well-being.

Compassion instead of condemnation, there's an idea.

What you are missing is that aripiprazole also has agonist, not just antagonist, properties. That's why it has been suggested as a good drug to use for Parkinson's-related psychosis (haven't seen good evidence yet).

And GPs provide stimulants all the time (I've asked them about it).

"Partial agonist" means it will bind to the receptor producing less of an effect than endogenous DA, thus blocking the effects of DA at that receptor.

A similar thing happens with phytoestrogens found in soy, and the estrogen receptors competing with endogenous estrogen; because the phytoestrogens have a much weaker effect they have theraputic potential in say, blocking the effects of estrogen in stimulating breast cell proliferation in some cases of cancer.

"These findings suggest that aripiprazole acts as a dopamine D(2) receptor antagonist on striatal neurons receiving excitatory inputs from the SN. (PMID 10525748)"

Ever see the movie "Crank"? There's a reason antipsychotics aren't drugs of abuse.

And I have no data on the prescription rates, so I'll leave that alone I guess.

"Ever see the movie "Crank"? There's a reason antipsychotics aren't drugs of abuse."

Actually, antipsychotics CAN be used as drugs of abuse, in particular Seroquel, which may be crushed and snorted, taken IV, or combined with cocaine. Just FYI.

yeah, this came up in the comments to No You Don't, at the end where I mentioned the cocaine/quetiapine combo being snorted as a "Q-ball". It was discussed somewhere in an old podcast, but I don't know which.

But the real take-home message, for me, is to consider avoiding Abilify in pts with psychosis who have a history of comorbid amphetamine abuse.(article)

Anyway there's some research done on Abilify and Amphetamine on ex-amphetamine users. They didn't relapse for 2 months. It's a bit early to draw conclusions about this research, but the prognoses are promessing. Next month 3 month's of no relapses.

I just had to drop a line.