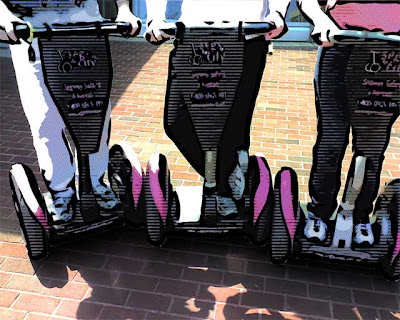 Today we had our second annual Shrink Rap Segway Roll. It was great. We were joined by our new Shrink Rap friend and human sacrifice afficionado, Victor. Roy got to try a Segway for the first time and I have to tell you, he was a natural. He was running practice rings around those orange traffic cones like he was born with a gyroscope in his feet. Dinah and I did our Segway roll last year so we were both already licensed but it was still nice to have a quick refresher. They didn't make us work our way up to top speed like they did last year, which was nice, however all involved Segwayers wanted to go faster than the machines would allow. Dinah had an unfortunate experience with her machine, which occasionally whined and sputtered like a finnicky horse before dying. Why are we not surprised this happened to Dinah? Eventually she traded for a new machine. I'm thinking it's bad technology karma brought on by washing her cell phone.

The tour was followed by a nice lunch overlooking the harbor, then a delightful afternoon of podcasting attended by another special guest and podcaster. (How's that for a teaser?) Roy took the picture here, as well as some video that will get linked as soon as he has a chance to put it up. Now we are truly multi-media.

...and theres [Note: Fix this obvious typo. And you need more commas. --your editor Clink] are new questions to consider on Double Billing: The Interactive Novel Project. Click here

Email ThisBlogThis!Share to TwitterShare to FacebookShare to Pinterest
Labels: segway

The guards in the Field Museum defend it on Segways.

Just thought y'all would want to know. :) Sounds like a nice day.

I'm catching up on your blog. I like the interactive novel idea (too bold of a project for me) ... and the Segways are way cool!

JR!! Where ya been, man? I was about to send three large men to do mean things in order to get you blogging again. My begging obviously had no effect.

I want you to know that in order to fill the void I had to start writing a serialized short story about a writer in prison. I will be putting it up eventually in support of Dinah's project. By the way, there will be an inmate named Eddie.

MWAK: Your reference to defenders on Segways gave me an idea. I think next year we should do a jousting tournament on Segs. Or maybe polo.

POLO on Segs! Who woulda thunk! It could be the new sport, like running marathons while juggling scarves, or trampolining...

clink: If you're dinah's editor, wouldn't you fix the typo?

MWAAK< both of them generally do. It was a subject of discussion so I guess she left it to make a point.
Actually, I think I need
Clink and Roy following me around everywhere to fix the typos of my life.

Hey, I only fixed the "delerium".

Roy, didn't you also fix Dinah's 'Roy Unleased' typo on Walk Like A Psychiatrist? The typo made a lovely pun lead-in.

MWAK: Ah, but I am also a psychiatrist. I can point out the need for change, but it will be up to her to actually make the change. Or something like that. The commas and typos have to actually want to change.

Why do you want me to Change?

I don't want you to change. You're perfect as you are, especially your hair.

Clink, no Dinah fixed her own typo for 'leased'. Go change it back so your comment makes sense.

I was actually just kidding about the Segway polo.

Are you guys going to do some pro bono therapy for punctuation, now? Hee hee. Maybe that's why all the punctuation took a vacation.