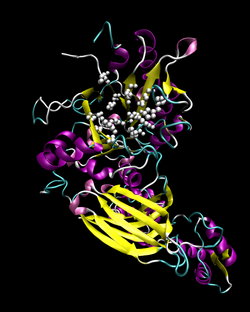 Here's another interesting knockout mouse model for schizophrenia. This was in the July 31 issue of Molecular Psychiatry, "Phospholipase C-1 knockout mice exhibit endophenotypes modeling schizophrenia which are rescued by environmental enrichment and clozapine administration," by McOmish et al., in Australia.

"Phospholipase C-1 (PLC-1) is a rate-limiting enzyme implicated in postnatal-cortical development and neuronal plasticity. PLC-1 transduces intracellular signals from specific muscarinic, glutamate and serotonin receptors, all of which have been implicated in the pathogenesis of schizophrenia. Here, we present data to show that PLC-1 knockout mice display locomotor hyperactivity, sensorimotor gating deficits as well as cognitive impairment. These changes in behavior are regarded as endophenotypes homologous to schizophrenia-like symptoms in rodents. Importantly, the locomotor hyperactivity and sensorimotor gating deficits in PLC-1 knockout mice are subject to beneficial modulation by environmental enrichment. Furthermore, clozapine but not haloperidol (atypical and typical antipsychotics, respectively) rescues the sensorimotor gating deficit in these animals, suggesting selective predictive validity. We also demonstrate a relationship between the beneficial effects of environmental enrichment and levels of M1/M4 muscarinic acetylcholine receptor binding in the neocortex and hippocampus. Thus we have demonstrated a novel mouse model, displaying disruption of multiple postsynaptic signals implicated in the pathogenesis of schizophrenia, a relevant behavioral phenotype and associated gene–environment interactions."

PLC-1 is one of those proteins involved in processing the signal after the receptor is activated. Think of the ignition in your car. If the key is the neurotransmitter, like serotonin (or medication, like Prozac) and the lock (or keyhole) is the receptor, then PLC-1 is one of the wires that connects the lock on the steering column to the starter, which gets the engine going. We are all so used to thinking that what is important is the action at the receptor, but it is easy to forget that there is this whole other layer of machinery that gets engaged once the receptor is activated.

These so-called second messenger systems use a cascade of Rube Goldberg connectors to make things happen. Just like a genetic error can cause a receptor to malfunction, so can errors in this second messenger cascade.

This particular enzyme is involved in the growth and connectivity of brain cells. The researchers show that mice who are engineered to not produce PLC-ß-1 develop cognitive problems which have similarities to those seen in humans with schizophrenia. Changes in the environment can minimize these problems, suggesting that this animal model could be used to test other treatments -- including medications that work very differently from what is out there now -- for potential use in this neurodevelopmental illness.
Posted by Roy on Friday, August 24, 2007

what a pretty, colorful picture

OK, so now we can make demented mice. The jump from that to curing schizophrenia is still so far away that it's just hard to get excited about it. I like things that are more directly linked to the here-and-now.

Will the mice have insurance parity?

Clink: no mouse parity. They only get coverage if they can demonstrate that their mental disorder is a direct result of experimental manipulation. It's a provision of LRISA (Lab Rat Income Security Act).

I am thinking of Dr David Hellerstein and his editorial about "The Disappearing Patient" right now.

Thanks, otherwhys. I hadn't read Dr Hellerstein's letter, but I agree with his observation.

I think that Psychiatry is a couple steps behind many other areas of Medicine, so that we are going thru the discovery of scientific bases for our field like cardiology and endocrinology did 20 or so years ago. Thus, the current relative absence of "the patient" in Psychiatry is part of evolutionary growth like it was for them some years ago.

As we begin to reach the limits of how genetics and neurophysiology can explain behaviors, I expect we will start to swing back towards humanism (as a specialty). However, I don't see that happening anytime soon, as this area is growing exponentially at the moment.

The first thing that struck me about this, was how great your analogy of key/lock/ignition/starter etc. was . . .

The second thing that struck me was the emphasis on environmental changes having such a large and positive effect on these mice.

Your closing lines mention, and I paraphrase, "especially medication", but it really struck me here @ the environmental changes.

To qualify that, though, I have an internalized set of beliefs and experience with how synergistically effective medication and positive environment changes can work together, so that informs you about why that aspect didn't jump out at me. It's already a given with me, that I believe, although of course I don't struggle with schizophrenia myself, and suppose that my belief may not necessarily be transposable to other mental illnesses.

Then again, since our brains process the way we interact with the world, since they are the seat of the whole personhood/world interface (setting aside philosophical and spiritual/religious aspects of the soul, as I'm speaking medically here), I'd think any positive changes would be beneficial.

The key, though, is to determine which environment changes, especially those not intuitive, not common sense, not usually thought of by most lay people, or even sometimes not commonly thought of by the mental health professional, are necessary to produce such positive outcomes in behavior and functioning, as reported in this study of these particular knockout mice.

In a more humanistic and less clinical tone, the key would be to determine which changes, for the patient in question (and many with similar illness), provide relief from suffering, respite from some of the struggles and torment, from some of the functional, interpersonal, and other difficulties and resultant emotional and psychic (am I using that term correctly?) pain that the patient regularly experiences.

Again, though, medication plays a large part, and often, I believe (although I have further thinking/developing of my beliefs/opinions/feelings on this subject to do), creates the opportunity to effect positive environment changes that, quite often, without the medication would perhaps not have near the positive effect or outcome.

I hate Clozaril. It made me gain close to 75 pounds in a year and did nothing for my stability. On the other hand it did wonders for a friend. I'd get those mice on appetite suppressants quick!