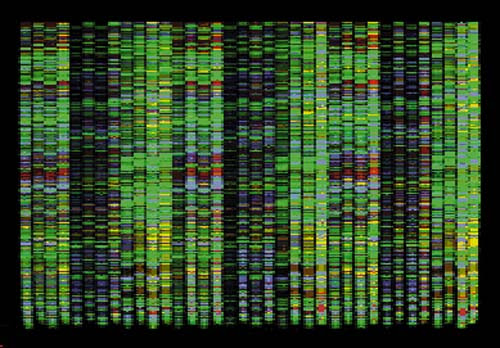 Schizophrenia has been long thought to be a heterogeneous disease, with many different pathways all leading to an illness with similar symptoms among its affected ranks. It is believed to be caused by a combination of genetic and environmental triggers, as there is a 50% chance of getting it if your identical twin does and a 10-15% chance if your parent or sibling does. Various environmental triggers appear to increase the risk of getting it, such as in utero infections, being born in the winter, and growing up in a family where there is a lot of yelling and emotional expressiveness. About one percent of the population has schizophrenia.

A recent study in Science of whole genome DNA in hundreds of people with and without schizophrenia finds that rare DNA mutations may more of a role to play than previously thought. From Scientific American: "In this study, researchers combed the genomes of 150 schizophrenia sufferers and 268 healthy individuals for never-before-seen copy number variations (CNVs)—mutations that result in large swaths of DNA encompassing multiple genes either being deleted or duplicated. Some such mutations have been found to be benign, but others have been implicated in ailments such as autism and cancer. The team of scientists, from research facilities across the U.S., found novel gene alterations in 5 percent of the healthy volunteers and 15 percent of the schizophrenia patients; new CNVs showed up in 20 percent of those subjects who developed symptoms at or before the age of 18."

53 different mutations were found in these patients. As more of these studies look at whole genomes from families with a high number of affected individuals (like mine, with 7 or 8 people with schizophrenia spectrum diagnoses), we will learn more about what goes wrong in these illnesses and how to better treat them.
Posted by Roy on Wednesday, April 02, 2008

Considering the relatively small sample size, the results are very thought provoking. I'd like to know the criteria for "schizophrenia sufferer", as well as "healthy individual." Lifestyle as well as health conditions (mental or otherwise) might play a significant role in genome expression. Also, did the population of schizophrenia sufferers include multiple diagnoses, such as schizoaffective disorder, or schizophreniform disorder, or were these all chronic patients. A larger study controlling for diagnosis, health conditions, etc. would be much more generalizable. Still, very cool!

Roy, that's a lot of people to worry about in a family. The psychiatric burden in my family is mostly typical Irish stuff. It hits some people harder than others, but most people are able to get by on their own. There are some who don't, and it's always hard to know how to support an adult who needs it. But we don't have seven or eight.

I agree that a larger study controlling for diagnosis, health conditions, etc would be better. but it is still an interesting study

That is interesting.....
Hopefully one day it will be less stigmatised...and seen just like CF or MS (life shortening, chronic, causing suffering) and those who suffer will be treated better.
Another interesting possibility though is if prenatal testing for susceptibility ever became available....would people rather have a child with CF or fragile X, or one who will manifest schizophrenia in their late teens or twenties?

I can identify with plenty of yelling and emotional expressiveness. I grew up in such an environment where I was a victim of verbal abuses between mum and paternal grandma during their shouting match under the same roof. I am now being treated for paronoid schizophrenia.

Yes my brother has it and there was horrible dysfunction in our home and a very good chance that my mother was drinking while pregnant with all of us and guess what? Everyone in the family has either schizophrenia, GAD, bipolar disorder, or depression.

Ladies stay away from the drinks and remember that the law may consider that child in your womb a non-person, but give it a few months it will be a real to life person and what you do to your body you do to your child's future.