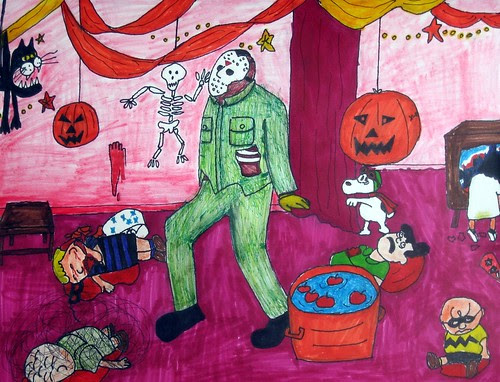 [credit: flickr user The_Leader]
Nice to see Clink sharing her AAPL learnings with us, as the forensic experts try to understand the behavior of forensic bogeymen (or the gender-neutral bogeypeople) like Freddie and Jason.   Just in time for Halloween.
I was struck by the total lack of understanding by two nay-sayers in yesterday's Opinion column in the Baltimore Sun.  Richard Vatz and Jeffrey Schaler often write about the so-called "myth of mental illness", taking a page from the 1960 Szasz book of the same name.
In the newspaper article, they lambast our legislators for using "political legerdemain" to sneak the long-negotiated Mental Health Parity Bill into the $700B bank bail-out bill.  Their opinion is that the category of "mental illness" is too broad and too costly, and provides an impression that most people with a label of mental illness are actually just whiny babies who can't accept the responsibility of dealing with "problems in living", like death, rape, or loss of job/house/401k/spouse.  They write:

"• Supporters of parity celebrate the new law as signaling the end of "stigma," but they fail to consider that stigmatization is a marvelous negative reinforcer for undesired behavior, some of which is called "mental illness."

• Substance disorders are arguably a function of behavioral choices and in no way constitute diseases to which insurance should apply. Such self-destructive behavior is best explained by mindset, personal values and how a person copes with his or her environment. Incidence varies by cultural context, and people can clearly stop or control their addictions through an exercise of free will. Not so when it comes to bodily illness; one can no more will away cancer, heart disease or diabetes than he or she can will their onset."

Lack of understanding.
They appear to also have a lack of understanding about how our health care system works for other (non-mental) illnesses.  One of the reasons they are against parity is that "there is no way to accurately confirm or disconfirm 'mental illness' ."  The same could be said for many somatic problems, such as headaches, back pain, nausea, and fatigue.  However, our health care system will pay for treatment of all these conditions, no matter how minor or subjective.  There is not a severity-based system where only physical conditions deemed worthy or severe enough get covered.  If you go to the doctor for a stubbed toe, the insurance company will pay for the visit and the Xray.  So, unless they advocate just as strongly for similar changes to the rest of health care, this argument does not hold water.
By the way, I also did not like the fact that the Parity bill was tacked on to the Bail-out bill, but only because I think such a bill should pass on its own merits.
And with Halloween right around the corner, what is truly frightening about their article is that one of the authors is an associate editor for the Psychology section of USA Today magazine, and is thus in an influential position to control what the nation's population of hotel customers and other readers get to read about these topics.  [Correction: I think this is USA Today Magazine, which appears to be a very different animal than the newspaper that gets placed in front of every hotel room door every morning... still...]
Boo!
Posted by Roy on Friday, October 24, 2008

Thanks for pointing out the media's always haphazard approach to this question, which seemingly will always be with us.

I think one can go too far in the direction of "addiction is a disease" (i.e. merely or only), but similarly in general medicine. All kinds of behaviors and personal attitudes can contribute to heart disease, lung cancer, etc. but they certainly get treated.

That was a depressing read. I have never understood the reasoning of people who will acknowledge any other system in the body can be dysyfunctional except the brain (although I suppose they'd allow for strokes).

The idea that the most complex organ we own, and the generator of not only all our physiological functions, but of our mental functions -- our mind -- can never malfunction is, to me, completely illogical and indefensible.

FWIW, the qwaky anti-vaxers quote medical information from the 19th-century to support their arguments, whereas Szasz's work is a mere 50 years out-of-date.

I don't care for the way the parity bill was passed, either, and suspect there will be some resentment from dissenters on the way it was sneaked into law.

OTOH, we've been trying to pass parity on its own merit for years with no success.

Whether a person bears no, some or entire responsibility for their difficulties doesn’t always mean we shouldn’t help. I never cease to be surprised that the concept of enlightened self-interest seems to have completely disappeared from the american political discourse.

Extreme case: there are cases of wealthy but benignly neglected 19th-century british children with access to a library who, however haphazardly, educated themselves. We could therefore conclude that if children wanted to an education they would look after it themselves and wash our hands of it. In practice, taxpayers get together to fund a universal public education system because we prefer to live in a country with educated citizens, and because we recognise that while a theoretical possibility of self-education exists, in fact people learn more quickly with the help of teachers.


A little closer to home: I doubled my income within a year of starting (publicly-funded) antidepressant therapy. I have since doubled it again and am now on privately-funded antidepressant therapy. Even if it were theoretically possible for me to pull myself out of a decades-long rut, this was clearly a smart investment by taxpayers, as I have been paying much, much more in taxes than I ever received in free meds.

Why wouldn’t we want to help our fellow-citizens become more productive? Really, why? Talk about cutting off your nose to spite your face.

Alison, that's a great way of putting it. The stigmatizing view reflects harshly heroic expectations of what people are capable of, which in turn is influenced by neurobiology.

Medicine exists to begin with because of human fallibility. Why don't we stigmatize anesthesiology? Pain is "just" in our heads after all, we could always just deal with it...

Should top Management be responsible to the public company performance?

Hm. By the authors' logic, insurance companies also shouldn't pay for the treatment of tennis elbow, torn rotator cuffs, or shin splints. 'Cause, you know, playing so much tennis or golf, or running so much in bad shoes on unforgiving surfaces, that you injure yourself is a completely avoidable behavioral choice.

I arrived here from a web search after reading the part about negative reinforcement. Un-fricking-believable. So normal people are just bottling up the crazy because they're scared? And for those for whom stigmatization is apparently not enough, screw 'em, they're faking it? I can tell you who these people are...the same people who think we should ban sex ed because they think if they ignore a problem, it will go away. Social conservatism, yay!

"OTOH, we've been trying to pass parity on its own merit for years with no success."

This should have passed years ago. It didn't. Evidenced by the stars of this post, there are too many righteously ignorant people at this time for it to pass on its own.

The indignity of it getting passed this way pales in comparison to the indignity sufferers have received.

To naysayers, better this as a costly rider than some train museum in Podunk, My State, or an Alaskan bridge, etc.