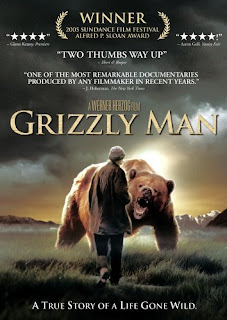 I watched the documentary Grizzly Man last night and it's still haunting me. It's the story of Timothy Treadwell, the failed actor and recovering alcoholic who dropped out of civilization and moved to the Alaskan wilderness to dedicate himself to the protection of grizzlies. The story became a documentary because, eventually, he and his girlfriend were killed by a grizzly. Their deaths were caught on audiotape, which mercifully was not played during the film.

There were so many things that fascinated and bothered me about this film.

On one level the documentatry represented a clash of cultures---the ecologically-minded friends who supported Treadwell's efforts to acclimate to the grizzlies versus the scientists and conserative traditionalists who felt this was dangerous for both the animals and humans. Given that the grizzly was killed by park rangers as they retrieved Treadwell's remains, fate eventually made the traditionalists' case.

The main character of the film was Treadwell himself---flamboyant and effeminate as he professes his love to every creature he encounters, yet adamantly straight when talking to his camera. Knowing that he aspired to be an actor made me constantly question whether or not I was seeing the real person during any given scene. Treadwell himself didn't seem to know his own reality. At one point he told friends he was an orphan from Australia and adopted an Australian accent as an affectation. Even his friend in California wasn't aware of this deception until after Treadwell's death. While living in the wilderness he recreated his persona again, this time as the center of his own story as he filmed over one hundred hours of himself and the bears. He became the lone martyr sacrificing himself for a higher cause, a form of rehabilitation through conversion to an ideal.

And then there is is ill-fated girlfriend, Amie Huguenard. LIttle is known about her because her family did not want to participate in the film. We are left to speculate about her reasons for following him into the wilderness and we could easily be wrong. She was afraid of the bears and considered leaving him, but stayed and died while trying to protect him from the bear attack. I'm left to wonder: was she a reluctant companion, a person naive to the wilderness who merely followed a charismatic eccentric? Was she a self-righteous rescuer who saw herself taming the wildman and, through love, bringing him back to civilization? We'll never know. We do know that in the end she was heroic.

What we do know about her and their deaths we find out through the creepy coroner who describes the attack, right down to the screams and moans. He describes their scanty remains and their wounds in vivid detail. It was awful to picture these unusual but vibrant people reduced to a small plastic bag inside a long metal box. I was struck by the questionable ethics of discussing this medical information, knowing that confidentiality (in theory) is supposed to extend beyond the death of the patient. If Amie Huguenard's family did not want to participate in the documentary it's questionable that they would have given permission for the pathologist to discuss her remains.

In the end Grizzly Man is not a story about bears. But it's still a story worth telling.
Posted by ClinkShrink on Tuesday, January 13, 2009

The director, Werner Herzog, seems to have a thing for great eccentrics hurling themselves at the wilderness: "Aguirre, Mask of God," "Fitzcarraldo," and a documentary about Antarctic scientists/explorers that he released a year or two ago.

Those are 2 of my Herzog faves. I tried watching Grizzly Man but I couldn't finish it -- it was too unsettling..and that had nothing to do with the deaths.

I've seen a number of Werner Herzog's films including this one. It still haunts me. I am with the traditionalists and feel that for the sake of the animals, people should not acclimate wild animals to humans. I thought he had not filmed the girlfriend because it interfered with his construct of facing the wilderness completely alone. My recollection is that he did fine until they were not picked up on schedule and then encountered different bears who had just woken from hibernation HUNGRY and grouchy.

I'm tempted to watch the Antartic film now; I saw it at Blockbuster but already had picked up Grizzly Man.

I saw "Grizzly Man" and felt disappointed to not get more psychology. I'd love to have one of you look at my ex-husband, such as I describe him and show pictures on my web site, and tell me what you think. He has something of this grizzly man thing going on.