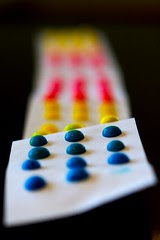 Just in time for Halloween, a post about candy, children, and behavior problems.  For many years, parents have noted an association between certain foods and their children's behavior.  "If he eats candy he's out of control."  "If she has anything with red dye in it, she'll be up all night."

These observations have caused many parents to have intimate knowledge of ingredient lists of food items, searching for things like sunset yellow, tartrazine, sodium benzoate, carmoisine, ponceau 4R, allura red, and quinoline yellow.  Avoiding these can be challenging -- find a processed food without sodium benzoate.

Double-blind, placebo-controlled trials have shown that artificial food colors have a significant effect in children with ADHD.  However, many have not been convinced of the association, given a lack of plausible explanations for how this range of food additives could cause behavior changes, including inattention, impulsivity, and overactivity.  Granted, any child will have these characteristics at times, but the Attention Deficit Hyperactivity Disorder (ADHD) diagnosis is reserved for those with such severe symptoms that they interfere with home and school functioning.  And, even in toddlers and 4th-graders without ADHD, food additives have been shown to have and adverse behavioral effect (McCann et al, 2007).

Most of the treatments for ADHD have direct effects on the brain chemical, dopamine.  Indeed, genes influencing the dopamine system (eg, DRD4, DAT1) have been found to be involved.  Yet, there has not been clear evidence of a connection between food additives and dopamine.  There have been some observations that certain food dyes can provoke the release of histamine, causing hives and itching but also inattention, hyperactivity, and dopamine release in prefrontal brain areas.

In the October issue of "the green journal" (American Journal of Psychiatry), McCann's group analyzed six genetic polymorphisms (I explained these here) involving genes affecting dopamine and histamine (Stevenson et al, 2010) in the same group of general population kids (not just those with ADHD) from the 2007 study.  What they found provides one possible explanation for why these additives cause behavior problems.

They found that two polymorphisms in the histamine enzyme gene, HNMT, and one in the dopamine transporter (DAT1) gene, were associated with inattentive and hyperactive symptoms when kids were given juice with the additives in it, compared with juice without the additives.

Meaning that children with these specific polymorphisms (think a genetic code swap, like the difference between "their" and "thier") will have an enhanced effect of histamine on their brain's histamine (H3) receptors and an altered effect of dopamine on the brain.

So, what's it mean?  It means those parents were right, of course.  And, for foods that are targeted for children, the food industry now should pay attention (!) to finding alternatives to these artificial chemical additives.
Posted by Roy on Sunday, October 31, 2010

Good post---the perfect Roy post, a few genes, a few enzymes, some links to studies....quash the candy habit, one more thing to feel guilty about..

So we had a "reverse trick-or-treater" kid accepted the hershey hodgepodge, but gave us a card with a small piece of organic chocolate on it and a plug for Fair Trade chocolate that is made without forced child labor.

I uploaded my pumpkin giraffe, but I'll leave Roy in the glory of the latest post, at least until In Treatment tonight.

What about red food coloring? isn't it made from bugs? and wouldn't THAT cause alot of problems? heh lol. disgusting.

My new ob/gyn doctor today just told me no charge and see him again on Thursday, since he wasn't able to help me today. Since when do doctors do THAT?

So, Dinah, was the reverse trick or treater planning to eat the Evil American candy made by brutalizing child labor? I mean, I'm all for parents raising kids in accord with their own values, but they should be consistent...You can't pose as highly moral and then devour the immoral stuff.

THis was a great post, confirms my own empirical observations.

I also wonder if something like this isn't involved in triggering of autism. Not necessarily with additives, but possibly those exonerated substances in vaccines. That possibly do something to the genetically vulnerable, but not to typicals. This would explain why it doesn't look as if the vaccines or something in them "cause" autism, as they only cause it in those primed for it already. Or, perhaps, it's a tipping point kind of thing: kids who are sick with a virus and have the shot and are genetically susceptible become autistic (whereas their male relatives were merely aloof and obsessive but basically pass for normal. Just theorizing (it could be drycleaning fumes or BPA or anyone or combo of many chemicals in the environment...

Nutrition is always a good start to making a change in one's life, period. Eating mostly whole foods is good practice for ALL kids, not just those with ADHD. This is why I like the Brain Balance approach - www.brainbalancecenters.com . They combine education, behavioral interventions, and diet changes to help kids with ADHD to their best and control symptoms.

Sarebear, when I was a kid we called red punch Bug Juice. Or was it the green punch?