Repealed: Kansas voters repeal law that could block people with mental illness from right to vote 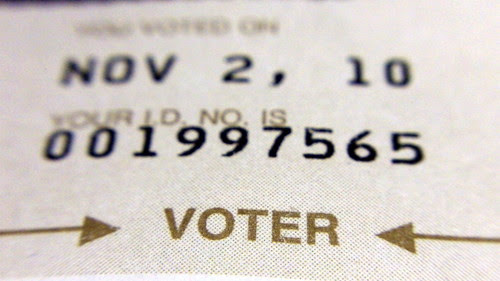 Back in the 1970s, Kansas passed a law that could prevent people with mental illness from voting. The law was never used, but advocates were successful in getting an amendment passed that revoked that law.

This law was passed at a time when stigma against mental illness was much higher than now. I'm guessing it was presumed that folks with a mental illness could not reason enough to exercise an informed vote, which is not true, of course. If 1outta5 have a psychiatric illness, including anxiety, depression, and substance abuse, then there could have been a huge swath of disenfranchised voters.

And there already exists, to a degree, a basic cognitive test for voting -- navigating the whole ballot process.  In Maryland, ours was electronic and no harder to use than an iPad, but I could still imaging some with severe dementia unable to navigate the system.  But there should never be a cognitive bar one must pass to vote; the challenge would be where you draw the line.
Posted by Roy on Wednesday, November 03, 2010

hmm...I helped a consumer with a developmental disability vote one year. He could not read. I just read him the ballot. The election ladies seemed not to mind. Not sure what the law was about it. They probably had to read it to him officially

We have to read exams to kids in school who are so designated. Thanks God they repealed that law. So many laws are stacked against mental illness, such as the law in California that allow electroshock therapy without patient consent here.

Anyway. Antiquated thinking and laws need to be put out to pasture.

"But there should never be a cognitive bar one must pass to vote; the challenge would be where you draw the line."

By the way, what about folks who vote based on someone's looks or some other criteria that has nothing to do with the candidate's fitness for office? I think they should be given a competency voter test.

Ladyk73, when my mother was still alive, I read her the ballot since she was visually impaired. If I remember correctly, she had to sign something authorizing me to do this. I can't remember if I had to sign anything or not.