Whether or not they work, they're getting cheaper. 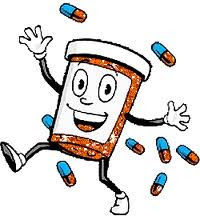 Over on Thought Broadcast, Steve Balt has a nice, disillusioned post about whether clinical psychopharmacology is a pseudoscience.    By the end of the post, I was ready to take down my shingle and go home.  I liked Steve's graphic so much (the little pill bottle guy juggling those mood stabilizers) that I stole it.


On another pharm note,  there are several popular medications that have recently gone off-patent or will soon go off-patent, allowing for more competitive pricing as generics become available.  Among them, several big-buck psychiatric medications, including Lexapro, Seroquel, Zyprexa, and Concerta.
Posted by Dinah on Monday, October 31, 2011

I take the drugs because, while they don't work as well as I would like and while they do cause unpleasant side effects and while they might very well be overprescribed and while big pharma makes big bucks off of me without caring what happens to me, those pills are about all that keep me out of hospital and functioning. Having tried many alternatives, drug holidays and my own concoctions, otherwise known as self medicating, I have to say that the drugs win every time. I wish this were not so. No one can prove exactly why they work but I am a walking experiment and I have reached my own conclusions, for me.
Psychotherapy can help but not in the same way. And let's remember that shrinks cannot solve our problems;they have enough of their own. I might die from these drugs one day but for now, I am alive and excuse me, I have to go shell out now because I do not want my house to be egged or wrapped in toilet paper.

For Heaven's sake Dinah, don't pull down your shingle! Neither Steve nor I would suggest you should stop trying to help people who come to you in distress.

What I believe Steve means, and what I have been trying to express in my own awkward way, is that there is nothing scientific about psychopharmacology. There is the phenomenology of mental illness, but there is no valid account of mental illnesses qua diseases. And Steve makes a good point about falsifiability. A theory that is not falsifiable cannot be called 'scientific' (remember your comment to the effect that the chemical-imbalance theory hasn't been disproven, it just hasn't been proven yet? Un-scientific)

I would augment Steve's excellent points only to say I could live with a physician writing prescriptions for any meds so long as he refrains from lying about what the meds do, and as long as he remembers to warn his client about side-effects.

As a well-educated (PhD in Molecular Genetics) consumer, I find clinical psychopharmacology to be maddening. It is definitely NOT the type of science I learned in class and in laboratories.

I like to think of some of the high potency drugs as carpet bombs on the brain. Sure, some nasty symptoms may abate, but at what price glory?

That being said, I'd probably be dead (or completely useless) without my drugs. And the drugs I take went off patent decades ago.

Why do you pick on psychopharmacology so much? I know enough people whose chemo for cancers likely killed them before the cancers would have. In that field, they throw everything at the patient and hope something works. Sometimes it does, sometimes it doesn't. Most of the science I have seen does not qualify as science under the strictest definition.

The differences between cancer and mental illness are legion and I don't want to hijack the thread. I'll list only a few of the differences: pathology, pathophysiology, cell biology, understanding mechanism of action of the relevant drugs.

In short, with cancer, we know what it is, we often knows what causes it, we understand the pathophysiology, we understand a great deal of the cell biology, we even know a fair amount of the molecular biology of cancer. We understand how cancer chemotherapeutic agents work. We know they are toxic and we tell the cancer sufferer all about the toxicities. We even obtain informed consent from them before beginning cancer treatment. Do you all do that with Abilify?

wv = coriere; a young person, usually male (fem. 'corierre'), sent about the office to do errands others are too lazy to do themselves.

Well, it might be an overreaction to close shop. I think Steve made a good point about the DSM being more valuable if used as a suggestion rather than as like a Bible. Treatment may be more effective when it is patient-centered and not DSM-centered. I read something by Allen Frances a long time ago and he had the same kind of theme. The DSM should be used more like a tool for trained clinicians to use their critical thinking abilities with. But now it's associated with taking normal behaviors out of context and over diagnosing everyone with Bipolar and Aspergers. Of course some people don't get better on these drugs if their symptoms are being taken out of their real world context and being made to fit within the context of the DSM. Some stuff you just can't medicate away.

It sounds like sometimes doctors are getting too hung up on the DSM. A kid meets the ADHD diagnosis, does not improve on Ritalin, but does hella better on a mood stabilizer. Or the opposite situation for a Bipolar kid. At that point it doesn't matter what the DSM says about diagnosis and corresponding treatment. The point is that the treatment worked for that individual patient even if he or she couldn't be effectively pigeonholed.

I agree with Jane's point but I also do believe that many psychiatrists do not use the DSM as a Bible. My doctor is/was an atheist.

I am happy with my drugs (even..to a degree zyprexa. They keep me sane and freer of anxiety. They have done so much for me. Miraculous in some ways. Perhaps because of this, I take a devil's advocate view of Big Pharma. They are not without fault (as we know) but their for-profit motive has resulted in research yielding life-saving (and sanity saving) drugs. This from a person who even supports some of the strong feelings going around against corporations. -Laura

Rob,
Could you send me your email address?
email me at shrinkrapblog@gmail.com
Thank you, if that's okay.
Dinah