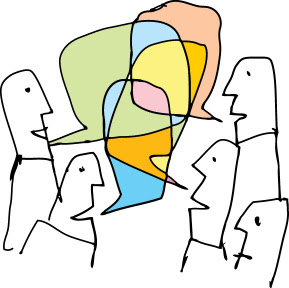 Why change the subject while everyone is having such a good time?  Perhaps Sarebear could pass around some cheese and crackers and Rob could pour some wine?  Alison, do bring some fruit or a baguette.  So I asked Dr. Breger if he had any thoughts, and from his vacation, he was kind enough to write us a guest post.
------

In my book "Psychotherapy: Lives Intersecting", which Dinah was good enough to review, I talk about failed cases as well as successful ones and try and spell out the general ideas of what makes good and bad therapy.  Many of the commentators have already touched on the main points, which I can sum up with what I call The New Fundamental Rule: you can do a lot things as a therapist but they must be for the patient's needs and not the therapist's.  This would include revealing things about yourself, the use of humor, apologizing for mistakes (almost always a good idea), and the like.  Many of the things reported by the commentators are examples of what I would see as always bad therapy: not listening attentively, being judgmental or critical, laying on diagnostic labels (though sometimes appropriate if the patient asks for it), and -- very common -- cramming the patient into one's theory rather than listening to what is being said and working out an understanding in a cooperative manner.
Some of the later commentators discuss psychoanalysis and contrast it with other forms of psychiatry.  This is a complicated issue since there are many forms of psychoanalysis and many analysts some good and some terrible.  Having trained years ago in a classical psychoanalytic institute, and having written two biographies of Freud, I think I am in a position to say that old style Freudian analysis is, for the most part, useless if not harmful.  Freud himself did his best work when he didn't adhere to his own rules.  The idea of a fixed fee, or charging for sessions no matter what, are bad ideas.  Even worse is the ever silent analyst who gives theory based interpretations rather than closely listening to the patient and working out understanding in a mutual fashion.  Caring, being friendly, being open minded, honesty, and acting like a real person rather than an all-knowing god, are all helpful to patients.  These are the things to look for if you are trying to pick a shrink.  There is also the very important issue of the match or fit.  Not every therapist will be good for every patient so you have to basically trust your emotional reactions or instincts.  If, in the first session or two, it just doesn't feel right, try seeing someone else.
--------
Do check out Dr. Breger's website  where you'll note that he has written two books on Freud.

No wine, but I have a truly lovely Bourbon

I am wondering about your issue of "laying on diagnostic labels (though sometimes appropriate if the patient asks for it)." Do you take insurance? In that instance, how do you handle a situation where you will not get reimbursed unless you give a diagnosis? How do you deal with the patient in that instance? I mean to say, do you whip out a DSM, list symptoms, and ask the patient to go over it with you so that he or she can be given a diagnosis? Do you ask your own set of questions and form a diagnosis that way?

I'm actually really curious. I want to compare how different therapists diagnose and how much the patient is usually involved in the final decision by the therapist.

Oh, laying on of disagnostic labels is sometimes appropriate if the pt asks for it.That is the rarew thing the pt may ask for.Ask for Xanax, get refered to why docs don't like it. Ask for anything at all other than a tissue or few dxs and be prepared for a fight.

I prefer diagnostic labels and being treated like an intelligent adult.

I'm posting this for Dr. Breger:

The issue of diagnosis and the DSM is a bit complex. Clearly, those of us who have been around the field a long time use various labels as a shorthand way of communicating, as when we say that person is a "borderline" or is on the "aspergers continuum. But, my overall stance, which I feel very strongly about, is that every person is unique and, as a therapist, it is crucial that I understand them in their own terms. If I have their DSM diagnosis at the forefront of my mind, it interferes with such attention and understanding. Obviously there are certain conditions -- severe depression, bi-polar, etc. -- where one must recognize the condition so that appropriate medication can be provided. But, for the large number of my patients, this has not been the case. If I had worked with a different population this might not have been true though, if you have the patience and skill, one can work with very disturbed people, even psychotics, effectively (see George Atwood's new book, "The Abyss of Madness" for examples.). See the case of "Nate" in my new book for someone who was treated very effectively despite the fact that he would have been easy to dismiss as a schizoid character if not a schizophrenic.