I Am Not A Robot 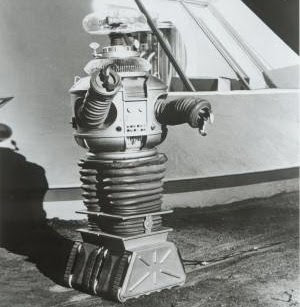 I'm sorry the "Prove You're Not a Robot" demand for blog commenters is sometimes hard to complete.  Unfortunately, this is a blogger issue, and not something we control.  It makes Shrink Rappers prove we are not robots as well, and sometimes I find the mere implication a bit annoying.
Oh, but it was fun writing this post.
Posted by Dinah on Sunday, September 09, 2012

Email ThisBlogThis!Share to TwitterShare to FacebookShare to Pinterest
Labels: dangerousness

I wonder if anyone has done a study looking at if some people have more trouble than others and why. I seem to be one of those people and I've always wondered why I find it so hard to make out those weird letters. Like the ones I have to look at now :< (is that an n or a u?)

Never insist that you ARE a robot. Not in front of a shrink, any way.

It does not compute.

But seriously, it's a simple Reverse Turing Test to block automatic spamming programs.

CAPTCHA is a form of reverse Turing test. Before being allowed to perform some action on a website, the user is presented with alphanumerical characters in a distorted graphic image and asked to type them out. This is intended to prevent automated systems from being used to abuse the site. The rationale is that software sufficiently sophisticated to read and reproduce the distorted image accurately does not exist (or is not available to the average user), so any system able to do so is likely to be a human.

Now here's something for ClinkShrink, something that may affect her professionally. Added to that, some disturbing (well, to me) data about irrational and dangerous mob behaviour, and why some groups of people may exhibit at least some of the symptoms of paranoia and social avoidance disorder.

Start with a (gulp) 126 page court ruling, which I think demonstrates manifest inhumanity in prison officials. Not all, but enough so it's a systemic problem.

Now have a look at the comments on this report about it. I see that most of the death threats etc have been removed, but there's a most unusual near-unanimity of opinion.

That's a popular news site, so may be unrepresentative.

So let's look at the American Bar Association report'scomments, where cool, calm dispassionate legal assessment takes the place of bloodthirsty howls from the mob.

Now consider the mental health effects this attitude is likely to have on Trans and Intersex people.

Ok, we now return you to your regularly scheduled program..