Roy on those Obamacare Health Exchanges 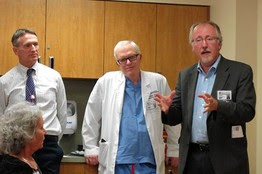 Our own Roy is in today's Wall Street Journal talking about Errors in the Provider Lists.  For the hard copy, see page six.

If you can't surf over (it may need a subscription), here is the article.

Roy would love it if you'd go over the the WSJ and write a comment!

The first day that Maryland's health exchange opened, psychiatrist Steven Daviss looked up his name and was surprised to see himself listed as participating in 36 new insurance plans from five different carriers.
Some plans listed him at an address that he had left three years ago. Others had the right address, but Dr. Daviss treats only hospital inpatients and isn't available for people looking for a therapist.
"Not one insurance company has contacted me to ask if I am accepting new patients," said Dr. Daviss, who complained to Maryland exchange officials.
The errors continue. This week, the exchange lists Dr. Daviss as an internist participating in 24 plans—including two that provide only dental benefits.
Many new health exchanges don't yet let shoppers see which doctors accept which insurance plans. Where exchanges do post the so-called provider lists, they often contain inaccurate or misleading information, some doctors say, including wrong specialties, addresses and language skills, and no indication whether providers are accepting new patients.
Exchange officials blame the insurance industry, where inaccurate and out-of-date provider lists are nothing new. "I don't think we realized that the underlying data had quite this number of problems. Now, it's becoming more transparent," said Joshua Sharfstein, Maryland's secretary of health and the chairman of its exchange.


Psychiatrist Steven Daviss, right, says some plans on Maryland's health exchange listed him at a wrong address and with the wrong specialty. Nathan Daviss
Robert Zirkelbach, spokesman for America's Health Insurance Plans, an industry trade association, said, "Health plans do everything they can to ensure their provider networks are up-to-date."
The new health exchanges are supposed to offer a transparent shopping experience, including clear information on participating doctors. But in addition to providing wrong information, the lists may give consumers a false impression of how big the networks are, some physicians say. Several exchanges warn shoppers to ask doctors directly if they accept the new plans.
Insurers say that in some cases, doctors may not be aware that they are in provider networks for the new insurance plans. Some contracts allow carriers to move physicians into new networks or lease their names to other insurance companies, even without keeping them informed. 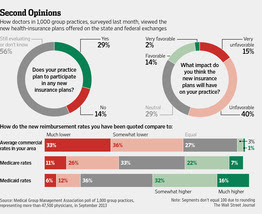 "These networks are often in flux—it's part of the Rube Goldberg contraption that is the U.S. health-care system," said Peter Beilenson, chief executive of Evergreen Health Co-op, a new Maryland nonprofit that leased its network of doctors from PHCS, a large provider group that is part of an even larger group, MultiPlan Inc., which contracts with 900,000 health-care providers nationwide.
Evergreen plans to inform some 7,000 Maryland doctors in the PHCS network that they are in its new network in mid-December.
Some carriers are using their usual provider networks for their new exchange plans and haven't notified those doctors to expect more patients. Others are offering low-cost plans and have asked providers to take reimbursement cuts, though many haven't specified the new rates yet.

Some doctors are surprised to see their names listed in new insurance plans on the exchanges, though they haven't signed new contracts or aren't accepting new patients. Insurers offer a variety of explanations, reports Melinda Beck. Photo: Getty Images.
Richard Thorp, president of the California Medical Association, said his practice in rural Paradise, Calif., was still waiting to hear what the new reimbursement rates would be—so he was surprised to see himself listed as taking five new low-cost plans from Blue Shield on the California exchange.
Blue Shield of California said not enough doctors signed up for its exchange plans, particularly in rural areas, to meet state standards, so it notified several hundred of its contracted physicians that they were being moved into the new network as well, at their usual rate, said spokesman Stephen Shivinsky.
He said that Blue Shield sent Dr. Thorp two such notices at a rural clinic where he treats patients, and that its contract with him covers any office he practices in. Steve Nord, the administrator for Dr. Thorp's private practice, said the contracts are very different. "There's obviously been a miscommunication," Mr. Nord said.
Unlike many states, California permits insurers to use "all-products" clauses in contracts with doctors, requiring them to participate in any plan the carrier offers, regardless of the rates. As a result, the California Medical Association said some doctors might be caught off guard.
"Come January, some practices could find they have a lot of new patients coming through their doors at less than break-even rates," said CMA associate director Brett Johnson.
David Aizuss, an ophthalmologist in Encino, Calif., said he won't sign all-products contracts and has declined requests to join the new plans. So he, too, was also surprised to find himself listed as accepting five new Blue Shield plans on the California exchange. Even if Blue Shield does pay his usual rates, Mr. Aizuss says, "I don't know if we have the capacity to handle many new patients."
Blue Sheild's Mr. Shivinsky said Dr. Aizuss is one of a handful of ophthalmologists listed erroneously on Blue Shield exchange plans. The list will be corrected by mid-November, he said.
The California exchange, called CoveredCalifornia, has been plagued with other provider-list problems, too. Officials took the doctor search tool off-line for more than a week because many doctors' specialties were listed erroneously.
The search tool was back up this week with no specialties given. But spokesman Roy Kennedy said it would soon add a hot line for doctors to call to report errors with their listings.
Write to Melinda Beck at HealthJournal@wsj.com

But, I'd wager Dr Daviss supports the legislation overall. If I am wrong, tell him to come to my site to contact me and I'll buy him his favorite beer and commiserate our pending demise with him over it.

Hey, it works for Obama.

Joel, I won't be pigeonholed into a black-or-white you're for it or against it category (like the Dems/Reps are doing). You have to break it down into its elements, some of which are good and others not...

I do not support:
-forcing people to buy insurance; they could pay as they go, like they do now
-fining people for not buying insurance
-poorly designed marketplace websites
-antitrust laws that prevent providers from working together to negotiate with carriers
-for-profit health insurance companies
-cauliflower

As for the beer, something in a rich stout, say, Old Rasputin. As for commiseration, I don't accept defeat easily, so would rather plan with you how to influence positive changes rather than complain and fret about what has been done to us. Beer facilitates such discussions.

I agree with the above, but, you are dealing with a rigid and inflexible group that make these laws and are hell bent in making the legislation be accepted as is. It is what characterological people do. While I do not accept defeat easily as well, with a fixed 30+ percent supporting this President even if he admitted he would personally have 10% of the population terminated just to get costs acceptable, not willing to wage there will be substantial changes coming.

This AM on the WBAL talk show, a listener texted that Obama will be seen as the second best President in our history after Lincoln. Really, I think the listener should be considering who was the President just prior to Lincoln that facilitated the coming of the Civil War. Fostering such a deep division, not what I felt Lincoln was best known for, but, I don't have an allegiance to either side of this polluted aisle that is DC these days.

Hey, by the way, what is your beef with cauliflower, not my favorite, but, are you advocating it be removed from society's choice as a vegetable?!

Thanks for the reply. I assume we would consume in responsible quantity. I'll look into this Old Rasputin brand, but must say, an interesting name to a beer, per what Rasputin is know for in history. Myself, not much a stout guy, unless it is mixed with a lighter beer.

Cauliflower should be banned.

""While I do not accept defeat easily as well, with a fixed 30+ percent supporting this President even if he admitted he would personally have 10% of the population terminated just to get costs acceptable, not willing to wage there will be substantial changes coming.""

Dr. Hassman, do you have a direct link to the quote in which Obama said that about having 10% of the population terminated? Or are you just like the typical fox news commentators who are saying anything out of thin air to slander Obama any chance you get?

Dr. Daviss, I admit I am not totally comfortable with the concept of forcing people to buy insurance. But I thought the concept behind this is if you don't, the risk isn't spread out wide enough which will cause rates to go sky high.

Personally, I wanted single payer. But the chances of that passing were as great as my being able to paint like Monet.

The statement was a sarcastic reply to the extremist commentary by Obama supporters who say throughout the media and in talk shows that not only is the Current Occupant of the White House without any critique, he should be considered added to the Mt Rushmore monument while he is still in office.

Blind loyalty to a person is not credible nor realistic support. Frankly, for people to be saying it is no big deal that 5-10% of people losing insurance coverage and most likely having a 40-100% in new insurance premium and deductable expenses just to pay for the alleged 30 Million who have no coverage is as insensitive a comment to the electorate people can make. So, to say you can sacrifice 10% of the public is basically my point to the above comment.

Not that you will understand my perspective per your reply above, but, it is the extremist zealotry people like me and Dr Daviss are having to put up with, Left or Right in attitude. It isn't a black or white issue, but, the people hijacking this issue aren't able to understand grays!

Again, it is what characterological people do.

Dr. Daviss, I really respected you until you made that personal attack on cauliflower ;)

Wow. What an odd place to see Obama Derangement Syndrome pop up.

Here is an education for all you Obama deniers of consequences, the time line of how long it took to indict Nixon for his role in Watergate, note the title of the site!:

(Remember here you have to copy the link and put it in the tab space at the top to link.)

Gee, the crime happened in June of 1972, and the pending indictment was not until summer of 1974.

So, the developing lies of this legislation are coming out in late October of 2013, plenty of time to nail Obama and his lackeys by the end of 2016. Seems history has the chance to repeat itself.

Waiting for the racist card next!

You know what I love, he was so hell bent to serve a second term. Careful what ya wish for, eh!?