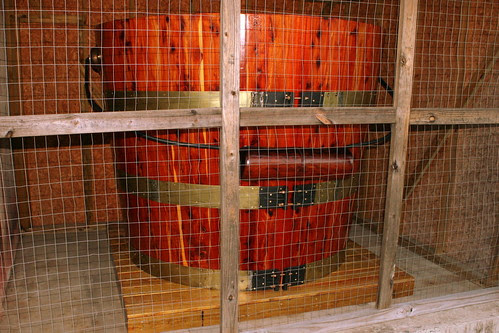 Dinah wants me to post more, so she asked me to put up my comment to her post on Results of the Survey on Who are the Mentally Ill. (If you didn't see the original survey, it is here.)

So, here's my comment. But I'll begin with the limerick...


There once was a man from Nantucket
With a thought that was quite a nugget.
"The world is round," he exclaimed;
Which confirmed he's insane.
So they placed him in "the mentally ill" bucket.


When I first saw this survey, I told Dinah it was a terrible survey and that she should take it down, because by even asking people 'who are "the mentally ill" ', it lends credence to the concept that one can put everyone with a mental illness -- or even more simply, a "mental health problem" -- into the same bucket.

Are there surveys about Who are the Physically Ill? Or, Who are the Cancerous? Or the Blacks? The Jews? The Gays?  You get my point.  Unfortunately, the survey did not have responses that said, "None of the above, because people are not defined by their illness and to say otherwise would be stigmatizing."

I was also surprised to see bipolar disorder scoring almost as highly as schizophrenia; same with mood stabilizers like lithium scoring right up there with antipsychotics.

Since there were already some comments to my comment, I'll address some here.
Liz used to feel hopeless and hate herself when accepting the "borderline" label. She has since changed her perspective and feels better. Good for you.

Three people (Not me and two Anonymi) thought the survey responses didn't fit their answers; "pretty impossible to answer because so many of the questions required more information." While I agree, I have come to see that this forces people to address their assumptions. This is good for the stigma discussion.

Dr Reidbord was quicker to get this than I was, finding the results revealing that this term is used in a variable and nonspecific way, often used "when the speaker can't express himself, for either linguistic or political reasons, more precisely."

I thought the wisest quote was from Borderline, who said:


"It's easy to pigeon hole and hard not to sometimes."

I googled "mentally ill bucket" and found only ten links. The best is "There are no excuses" from K. Wolf-Madison, who wrote more eloquently along the same line as I do above. "The marginalizing of the mentally ill with those words continues to damage us all."

Frankly, I don't like the limerick, as we all know what were the original lines, and to take a line from Freud, what was the possible slip there, Roy?

Labels are always a double edged sword, and in the end, the people who wear it and can handle it don't make it the sole defining moment for them. Look at me as example A, I am a psychiatrist, and some scorn me, some fear me, and some are appreciative of me.

So, you go with what works for you. For me it is simply this, we strive to be healthy and functional as a foundation, and when we lose this, we want it back, and we hope to restore it on our own, but, no one is an island, eh? We just have to hope that those we turn to will be as healthy and functional to allow the restoration to occur. After all, before we can save others, we ourselves have to be safe.

Frankly, I think someone at some mental health blog should ask the real poll questions based on this simple premise: Has mental health care been improperly altered, if not corrupted, and people aren't allowed to get the real access to ways to regain health and function they need?

Some specifics to this? Who, how, when, and why did mental health care find itself disrupted and mislead? What are real and responsible interventions, and who are best able to provide them? Who, what, and when defines the endpoints that health and function are restored? And, why do people have to tolerate possible incompetence and irresponsibility, and thus be thwarted in doing and being their best?

I honestly like to keep it simple, so here is my alternative limerick to help the thread, if interested:

"When someone gets ill, it's unfair,
one hopes to find people who care,
it's not just from pills,
one has to learn skills,
to appreciate life can be shared."

Alright, a bit corny, but the point is there. By the way, do you like to consider using atypical or second generation antipsychotics for women in pregnancy? There seems to be some literature advising this of late.

If interested, you can consider a reply at my site. I certainly am interested in hearing from colleagues, and patients.

Be safe, be well.

Hi, Joel. I like your limerick better, although it would be improved by adding "Nantucket."

While I thought Dinah's survey was hard to answer, yours would be even harder. And I believe Tim Murphy's legislation is hoping to address some of these points, though all will find things to like and not like, such as involuntary treatment.

Thanks for mentioning the horrific negatives of the Murphy bill. Yeah, that will really encourage people to see treatment. NOT!

Everyone diagnosed with a mental illness needs to read that legislation very, very carefully to see what you will be giving up in terms of privacy.

Pay attention to what your legislators are up to. I hope it fails. I will be talking to my psychiatrist to get his view on all of this. This scares the living crap out of me.

AA, I know it's mindboggling. It's not even logical to think that a student would even see a mental health professional at a university if that information was going back to the student's parents. Let's not stop there. Let's give the parents their daughter's gyno records, right? We want parents to be able to help.

It's stupid to even think students would go. Does anyone think a student would continue a relationship with a psychiatrist or psychologist who is feeding information back to the student's parents? Really? Common sense isn't so common, apparently. Once a student finds out mom and dad know what they shared in confidence, I guarantee you it's done. I saw a psychiatrist at a university, but if this legislation had been law, no way would I have gone.

The stupidity of this is just mindboggling.

I think it incredulous to believe turning to politicians to set precedence in mental health care needs, no, it is ludicrous! Look at the chaos unfolding with Obamacare, and why don't you all read up on what the IPAB will do if enacted.

Moreso, I just wonder what physician would advocate for political interventions for mental health. Sorry, but in my opinion, not one who cares and wants to control the treatment process, at least in a responsible and accountable manner.

Just keep letting outsiders chip away at autonomy and independence, must be fun to live under tyranny!