My Emotional Support Alpaca Will be Arriving Shortly! 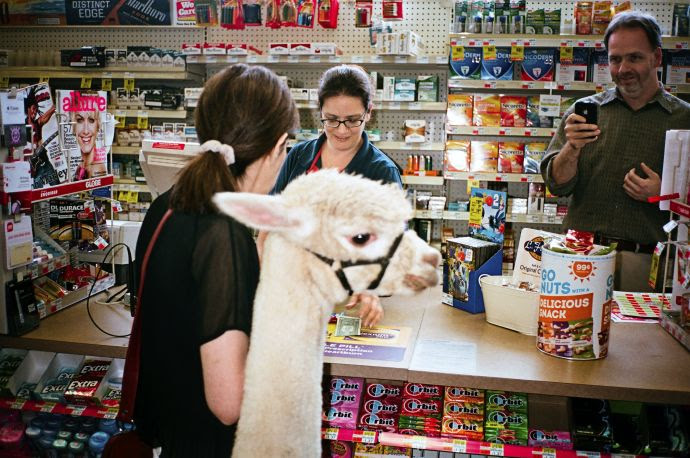 This one couldn't go unnoticed.  If you're a long-time Shrink Rap reader, you know we enjoy emotional support animals --  ducks in particular -- so I must send you over to The New Yorker to read "Pets Allowed" by Patricia Marx.

Marx starts by letting us know how she likes her animals: medium rare.  She talks about Emotional Support Animals versus Service Animals and what about the rights of those without a disability, citing a plane that had to make an emergency landing on a cross-country flight when an emotional support dog repeatedly relieved himself in the aisle and people were getting sick.  Like a scare for Ebola virus, this required a hazmat team.

So Marx on a journalism endeavor that I would have loved to have done: she goes around town -- New York City to be precise -- with 5 different Emotional Support Animals. She starts at the Frick Collection with a turtle, and later in the day gets the critter a manicure in anticipation of its attendance at a Bar Mitzvah.  (Really, is that necessary? I'm guessing the turtle didn't get to pick out the color.)

Marx then takes a snake around town.  Let me quote:

Here’s what happened at the Chanel boutique: “Hello. I’m looking for a pocketbook that will match my snake,” I said to a salesman. “Maybe something in reptile.” I shuffled Augustus from one hand to the other as though he were a Slinky.

“I’m sorry, Ma’am, I have a thing against snakes, so let me get someone else to assist you,” he said, as if he were telling the host at a dinner party, “No dessert for me, thank you.”

A colleague appeared. “Wow,” he said, leading me to a display case. “We do have snakeskin bags back here. Is he nice? Does he bite?” The salesman handed me a smart, yellow python bag marked $9,000. “I think this would work the best. It’s one of our classics. I think yellow. Red makes the snake look too dull.”


Marx proceeded to take a 26 pound turkey named Henry on a bus ride and out to lunch at a deli, then there was the very cute alpaca (pictured above) who accompanied her to CVS, and then on a train ride from Hudson to Niagra Falls where they went to an art exhibit.  Finally, Marx flew to Boston with a one-year-old pig named Daphne, where they went to The Four Seasons for tea.

All I could think was that I want a job where I could be paid to drink tea with a pet pig and write about it.

I have a suggestion Dinah. Register a duck and take him/her with you, and then write about your experience on Shrink Rap! ;) I would but it just wouldn't fly!

I had a Pekingese that I took pretty much everywhere, except in stores and restaurants. She liked to go riding, shotgun in her comfy bed with AC vents pointed towards her. I probably could have gotten away with buying one of them vests but I'm one of those law-abiding citizens.

Here on Oahu, this has become an issue. People were buying false service dog IDs online for as little as $20 and using that to bypass the so-called system. The issue is the ADA law, which says that establishments cannot require owners to show an animal license for entry.

The State created a bill that would require service dogs to wear a badge/vest approved by a national organization that identifies the animal as a service dog but even that would not be 100% full-proof.

I'm all for ESA animals but I think we need to draw the line somewhere. Thanks for sharing this story. I wish someone would do what Marx did here and experiment with other animals but it would probably cause a public uproar. People here are pretty mellow but hit the wrong person and all "you-know-what breaks" loose!

What a great New Yorker article. An engaging story with important truths about personal entitlement and pet-worship in our culture. I wrote about the same topic some years ago, not nearly as well.

A related, more vexing issue here in San Francisco is the popularity of disability placards for cars, which permit free parking in a city where parking is scarce. Far too many placards are given out, many fraudulently. Given the choice, I'd prefer to deal with emotional support ducks.

There are websites which offer letters from physicians and all paperwork to allow animals to be considered Emotional Support for airline travel. No questions asked, $150.

Emotional support animals? That's goofy. There are lots of things that can help with mood and anxiety. Not just animals. Learn meditation. Eat some chocolate. Lay off the lattes. Take up yoga. I have a mental illness, and I don't want your untrained, ill behaved dog sniffing my leg at the airport (this happened). The woman repeatedly told the dog to sit, and it never followed directions. What about my emotional well being? Can I get a letter from my therapist that says ill behaved animals increase my anxiety, and I need to not be subjected to them?

Service dogs are different. The person cannot function without them. They are well trained and don't bother anyone.

If a person cannot function without having an emotional support animal around, then maybe they need to look at a medication change.

I am the first to admit the positive affect of an animal in your life. I have heard way too many first hand accounts, and seen it in my own life. That being said, I do believe that it needs to be done within the bounds of the law. This is where having your needs and emotional stability to be evaluated by a professional; and by professional I do not mean someone with a talk show on TV.
http://www.psychiatricreferral.com/Psychiatric-Treatment-Psychiatric-Therapy-New-York-NY.html